Progress on Wages and More in Japan 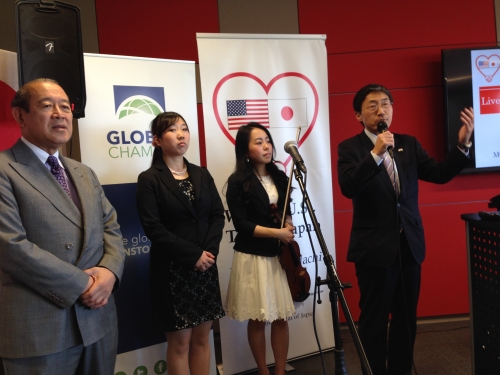 Last week Global Chamber headquarters was visited by a delegation from Japan including Ambassador Ichiro Fujisaki.

One person in the delegation was Mr. Nobuo Yoneyama, President of Nisshin Global Corporation... helping SME's in Japan enter the global market.

Below Yoneyama san reports on 5 key news items regarding Japan in his company report.

The information supports their overall message that progress continues in Japan for the economy and in business.

Japan continues to be a strong market for companies around the world.

This year's March 11 marked the 4th anniversary of the disaster. The National Police Agency, Ministry of Environments and prefectural government of Iwate, Miyagi and Fukushima updated the damage as follows:

2. Government's Commitment for RES of 2030 Expected To Be Met

According to METI's well-informed people's round table of March 10, which discussed future best mix of power sources, the prospect of renewable energy's share for the year 2030 is 21.37%. Governmental commitment of renewable energy's share for 2030 is 20% or above. So, the prospect rather surpassed the government's long-term goal. Its breakdown is as follows:

Major companies are raising their base level of monthly salary for their fiscal 2015 to share the increase of profit with their employees. Following are some representative companies' decisions:

All Nippon Airways        First time since 7 years ago

Salary base increase was popular in Japan in early days to evenly share the fruits of the high economic growths between management and employees.

Performance assessment based pay raise had been made over and above this salary base increase individually. As you see, major companies like the above had suspended their salary base increase since the burst of the bubble economy and through the subsequent recessions in 1990s.

Japan and France held a 2+2 meeting (Foreign and Defense Ministers meeting) on March 13 in Tokyo.

Besides agreeing on mutual collaboration to counter terrorism of Islamic State, a specific agreement was made for co-research and co-development of defense equipment in the field of sonar, unmanned undersea vehicle, robot and cyber defense.

The Hokuriku Shinkansen (bullet train) connecting between Nagano Station of Nagano Prefecture and Kanazawa Station of Ishikawa Prefecture was inaugurated on March 14. As the result, a trip from Tokyo to Kanazawa through Nagano with the distance of 450.5 km is shortened by 1hour and 20 minutes to 2 hours and 28 minutes. Also, a trip from Tokyo to Toyama is shortened by around an hour to 2 hours and 8 minutes.

0 comments on "Progress on Wages and More in Japan"