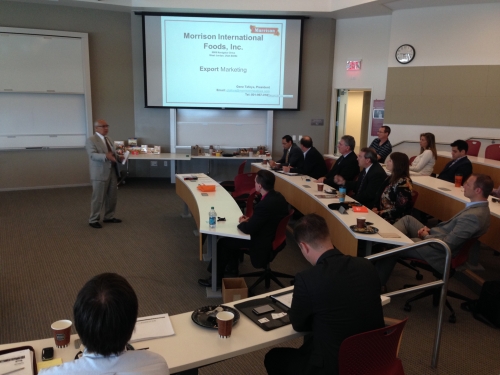 100% of the time, global growth is sub-optimal, and so we're dedicated to help our members get to the next level - now, next month, and ongoing.

We held an event last week in Salt Lake City to introduce the idea of crowdfunding for exporters. Kati Suominen based outside Utah has been working on these solutions for years and has through Trade Up Capital Fund developed the only crowd-funding resource for exporters - like West Jordan, Utah-based Morrison Meat Pies.

Gene and Susan Tafoya saved Morrison through a combination of investments including automation, marketing and global expansion. One key round of funding for Morrison Meat Pies came through Trade Up Capital Fund.

In his presentation, Gene talked about how Morrison Meat Pies was formed in 1883, the oldest continuously operating food production company west of the Mississippi.

The company was about to go out of business, and having grown up nearby off the Capitol area to one plant, and knowing that there was more potential, he and Susan bought it.

Their epiphanies included recognizing that certain foreign markets were ideal for the product, and yet until then Morrison Meat Pies had largely been sold in Utah only. For instance, Americans eat on average 1-2 pounds of lamb per year, but in New Zealand, that average is 60 pounds per year! Opportunity!!

Seeing opportunity was only one part of the puzzle. As Dr. Deming said, "You have to know what to do." Gene and Susan quickly came up to speed - investing in automation and scalability. Some of those more recent investments have come through Trade Up Capital Fund and the crowd-funding mechanism.

Gene left us with words of wisdom...

"Networking has kept us in business."

"We're all in this together."

Special thanks to all of our speakers, and a special thank you to the David Eccles Business School of the University of Utah. Great venue!

Watch for more stories from this event, and our next events in Salt Lake City.

And for information about joining the global tribe outreaching to 500 metros around the world, click here.