The New NAFTA: Insights & Implications for Your Business 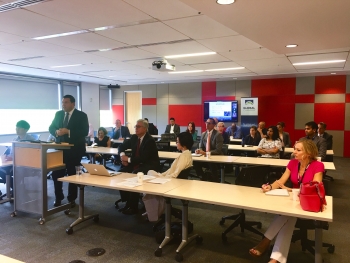 The current negotiations on the North American Free Trade Agreement (NAFTA) are focused on making substantial changes most notably in the automotive industry, but also in agriculture, labor, textile, aerospace, intellectual property, and more. As negotiations continue, uncertainties as to the outcomes persist, and it is very difficult to precisely predict whether a consensus on key portions will be achieved by the end of this year, 2018.

You can watch the discussion HERE.

On finalizing NAFTA and other trade agreements
(By Carol Colombo, Regional Contact to the U.S. Trade Rep. Lighthizer)

Overall, speakers shared mixed outlooks on whether an agreement on NAFTA will be achieved in the near future.

With so many uncertainties, the best thing for businesses to do now is to simply keep a close watch on market trends and discussion topics. There will be opportunities for members to input along the way.

Daniel D. Ujczo, Practice Group Chair - International and Regional Practices at Dickinson Wright. Dan is an international trade and customs lawyer who specializes in Canada-United States and North American matters. In addition to his legal practice, Dan has responsibility for coordinating the firm’s innovative Canada-US Platform where Dickinson Wright is one of a limited number of legal service providers that have full-service offices located in Canada and the United States. Dan collaborates with more than 400 Dickinson Wright attorneys who regularly assist businesses that are navigating the cross-border regulatory and legal environment on issues such as customs and regulatory compliance, corporate structuring, M&A, taxation, business immigration, intellectual property protection, and financial incentives. Dan also provides public policy counsel to government officials and industry leaders in areas of regulatory cooperation, border security, economic development, labor mobility, and public-private-partnerships. A US-licensed lawyer, Dan is one of the few individuals that has served in the US and Canadian governments, as well as private practice and academia.

Carol Colombo, Regional Point of Contact to the U.S. Trade Representative Amb. Lighthizer. Carol has been representing the Office of the President of the United States, U.S. Trade Representative for the State of Arizona. She also serves on the Arizona District Export Council, and is Chairman at Amber Alert GPS. Carol leads the Trade Policy Committee for the Global Chamber Phoenix Chapter.

Christian Aguirre, Executive Director at Global Chamber Hermosillo. Christian is an experienced Business Director with a demonstrated history of working in the venture capital and private equity industry. He is skilled in international project management, negotiation, business planning, customer service, and incubators, and a business development professional with a Master of Business Administration (M.B.A.) focused in administration from Universidad del Valle de México.

Arturo Zamarippa, Executive Director at Global Chamber Guanajuato. Arturo is a University Professor and a Linguist in Guanajuato, Mexico. He has been an entrepreneur since 2000 starting three different business in the State of Oregon in the United States. With over 17 years of experience in business management and customer service he is also the Co-founder and Director of English Language Center in Guanajuato, Mexico. He is interested in promoting international networking, developing business and conducting scientific research in language teaching.

Indira Jeffrey, Director at iGlobal Business Consulting. Indira is the CEO of iGlobal Business Consulting, an international business consulting firm, and helps medium-sized businesses throughout the entire export or import process into Mexico, Latin America, the U.S., or Europe. She is also the Deputy Director of Global Chamber Guanajuato. Throughout her 21 years of professional experience, she has performed successfully as an entrepreneur, mentor and community leader.

Grant Doyle, Executive Director at Global Chamber Calgary. Grant is a business development and brand building expert with experience in entertainment, education, oil and gas, technology, sports, agriculture, tourism and government relations. He has an extensive network of connections across the world and he has built a network of nearly 60,000 people through brand building and business development. He's bringing those connections and skills together as he builds out a successful chapter of Global Chamber in Calgary.

Dr. John Min, Chief Economist at Tempus. Prior to working with Tempus, John was the Founder and Chief Economist for World First USA and worked as the VP of Sales for Ruesch International, an international financial institution based in Washington DC.  Throughout his career, Dr. Min has also worked with companies such as JP Morgan Chase, Everbank, Management Concepts, Western Union, AFEX, and Ebury. Outside of the office, John spends much of his time in the classroom teaching economics at Northern Virginia Community College since 1999 and masters of finance courses at New England College of Business and Finance and London Academy of Trading since 2008. He earned his Doctorate in Economics in 2003 from George Mason University in Fairfax, Virginia.

Contact us if you would like to reach out to a speaker or if you simply want more information.

0 comments on "The New NAFTA: Insights & Implications for Your Business"