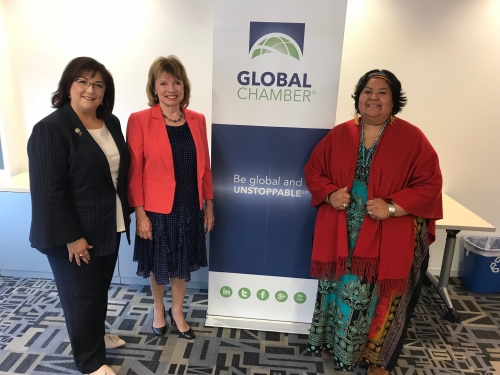 We gathered 4 experts in protocol to share tips on receiving international visitors to your company. They discussed everything from how to set up the visit, how to impress your visitors when they're there, and how to follow-up.

This event was the 2nd of 3 summer sales sessions for members doing business across borders.

Some of the key take-aways...

Melissa has presented educational sessions at a number of conferences on protocol and graduation‐related concerns. She consults with colleges and universities in the US and Canada on commencement and the graduation process. She currently team teaches a special events programming class through the ASU College of Public Service and Community Solutions.

Melissa is a Certified Special Events Professional (CSEP) and holds a Bachelor's degree in Journalism and Public Relations from the Walter Cronkite School of Journalism and Mass Communication at Arizona State University and a Master’s degree in Educational Leadership from Northern Arizona University. She completed training as a Protocol Officer through the Protocol School of Washington®

Gloria Petersen, CPP, is founder/president of Global Protocol, Inc. Her dynamic presentations have inspired audiences for over 30 years to handle professional and social situations with class and finesse. Gloria is a graduate of the Protocol School of Washington® and other certifications include The Professional Image Institute, Dale Carnegie, and The Leadership Institute. Gloria is a renowned Certified Protocol Professional and author of The Art of Professional Connections, a four-guidebook series with companion Subject Matter Expert (SME) training modules. Her clients range from Fortune 100 companies to emerging entrepreneurs. Gloria hosted the FOX television series, “Image of Success,” served as etiquette judge on The Learning Channel, and has served as an expert on numerous radio and television shows. She has also published articles and served as a contributing columnist for magazines, trade publications, and corporate newsletters.

Mark Jackson is Honorary Consul General of Japan (Birmingham) and Global Advisor for Global Chamber Birmingham (Alabama). Mr. Jackson began his career in teleconferencing in 1991.  After working for others in the industry, Mr. Jackson established Moreson Conferencing in 1996 in a toolshed in his parent’s driveway.  Moreson has grown to provide reliable and cost effective teleconference services in over 65 countries.  In 2015, he launched his newest company, Clarity Global Health Systems. Clarity’s purpose is to  design, develop and launch a global health information exchange that will allow quick and accurate access to patient healthcare data, Due to his considerable influence within the Alabama business and political community and his efforts on behalf of Japan, he was named Honorary Consul General of Japan in July 2014. In this capacity, he has worked to strengthen relations between the United States and Japan; playing  a part in the 2015-2016 SEUS Japan conference and the refurbishment of the North Alabama Japanese Garden in Huntsville, Alabama. Mr. Jackson received the 2017 Samuel Ullman award for exemplary service to the Japan-Alabama relationship. Honorary Consul General Jackson was appointed to the position of Country Representative for Japan by Sister Cities International in December 2016.

De Alva Ward is a Hopi/Paiute Shaman and Spiritual Teacher of Arizona. Her Hopi name is Dawa Mana, which means Sun Maiden. Her clan relations are Butterfly and Badger. As an indigenous practitioner, she incorporates her cultural practices to provide life purpose guidance, spiritual transformation, and energy work for the physical body. She will be sharing Native American Indian protocol considerations that should be respected when being received as a guest at a meeting or event.