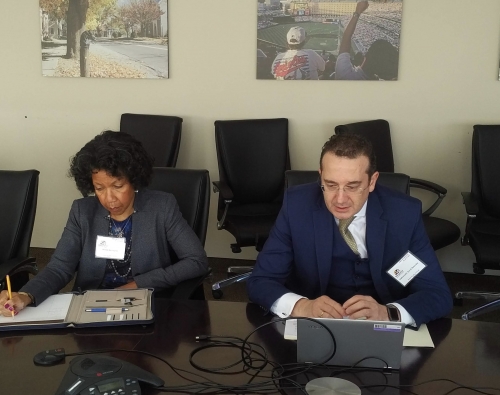 Global Chamber® was pleased to host Georgia Ambassador to the U.S. David Bakradze on October 30th in Baltimore at Maryland Department of Commerce. He discussed export, import and investment opportunities for U.S. and other country companies in the country of Georgia. The discussion included Q&A from local attendees and from our globinar audience. Pictured... Ambassador Bakradze (R) and Brenda Harrington of Adaptive Leadership Strategies and Board Chair of Global Chamber Baltimore-Washington.

We do plan to post this globinar, and when it's ready it will be located HERE.

Ambassador Bakradze discussed the dramatic improvement in the ease of doing business in Georgia since 2005. The country has taken great strides to make being an entrepreneur and running a business much easier. In 2005 Georgia was ranked #112 easiest country to do business by the World Bank, and they jumped to number 9 in 20015. The Ambassador hinted that the new 2018 rankings might show further improvement, and indeed they did... now up to number 6, surpassing the U.S. and the UK. Below are the rankings of the top 8.

For more information about doing business in Georgia, review this information at the link in a blog post written by Elshan Baloghlanov, Managing Director at WCC International HERE.

David Bakradze - Ambassador of Georgia to the United States of America

David Bakradze was appointed Ambassador of Georgia to the United States in Washington D.C. in December 2016.

Ambassador Bakradze has a long and distinguished career in diplomatic service since 2002. He has served in a number of senior official posts in Georgian public service.

Prior to his appointment as Ambassador to the US, David Bakradze served as the State Minister of Georgia for European and Euro-Atlantic Integration and was responsible for implementation of activities of the Government of Georgia on European and Euro-Atlantic integration. In particular, he was in charge of coordinating the work of the Government on implementation of key instruments of integration, such as EU-Georgia Association Agreement (AA), Eastern Partnership for EU, Annual National Program (ANP) and NATO-Georgia Commission (NGC); as well as coordinating Strategic Communication and European Assistance Programs for the Government of Georgia.

Ambassador Bakradze’s career includes a number of notable and senior positions:  State Minister for European and Euro-Atlantic Integration (2014 – 2016); Ambassador to the Hellenic Republic and the Republic of Serbia (2012 – 2014); Senior Counsellor and Charge d’Affaires to the Republic of Finland (2008 – 2012); Head of First European Division, Ministry of Foreign Affairs (2005 – 2008); Counselor of the Permanent Mission of Georgia to the UN, Embassy to the Swiss Confederation (2002—2005); National Security Council of Georgia covering Human Rights, Information and Analysis, Law Enforcement Institutions (1997 – 2002); Press office, office of the President of Georgia (1996 – 1997).

Ambassador Bakradze is married to Anna Matsukashvili and they have three children.