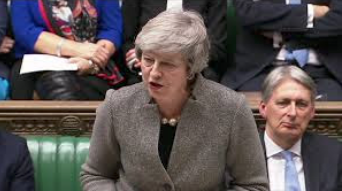 British Prime Minister Theresa May is considering a "meaningful vote" during the third week of January to reconsider BREXIT options.  This follows an announcement from the cabinet that it was making preparations in case there is a no-deal BREXIT on 29 March.

The voting would be on amendments to the current BREXIT deal and would take place before the key Parliamentary vote on her plan.

Most Members of Parliament - including many on her own side – have indicated that they are against the version May presented to the EU.  The Prime Minister, after surviving a “no confidence” vote, had been moving to a “deal and no-deal” vote, hoping that enough MPs would swallow their objections and get behind her version of BREXIT.

But few MPs are showing signs of changing their minds.  So rather than wait for what seems like an inevitable defeat of the current version, she is preparing a moderating approach.  She is hoping that contrary proposals will be defeated and smaller modifications to the existing plan will emerge by a process of elimination as the best alternative to a “no deal” BREXIT.