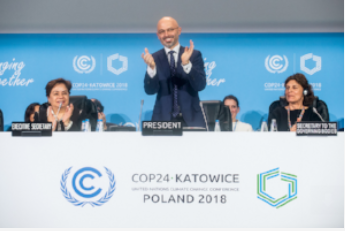 The 24th United Nations global climate Conference of the Parties (COP24) was held in Katowice Poland, December 3-14.  The selection of Katowice as host of the conference was intended to highlight an on-going energy transition occurring in a traditionally fossil-fuel intensive region.

The global energy landscape is changing significantly, driven by economic development and marked by the growth of renewables.  The Special Report on Global Warming of 1.5°C by the UN recognizes dire consequences and urges the rapid scaling of renewables to avoid irreversible climate impacts.  2017 marked the sixth year in a row in which new power generations from renewables outpaced conventional sources including from coal.

Negotiators from 196 countries and the European Union worked for two weeks on the Katowice Climate Package, implementing the Paris Agreement.  The conference highlighted that the growth of renewable energy can not only moderate global warming, but can also create new socio-economic opportunities for countries, regions, and local communities.