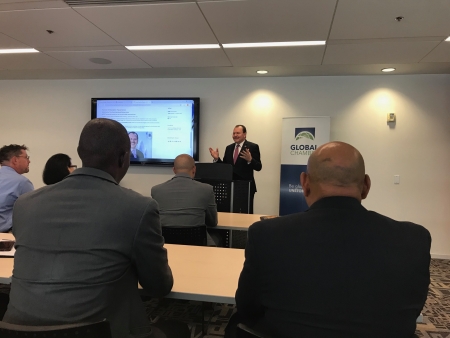 We were pleased to host Tunisian Ambassador Fayçal Gouia as part of our 'Ambassador on Business' series in coordination with Rep. Tony Rivero. Because of Rep. Rivero, Ambassador Gouia (goo-ya) became the first foreign Ambassador to speak in front of the Arizona legislature in the 100+ year history of state. Really! Wow! And we hosted the Ambassador at Global Chamber® headquarters, too.

The Ambassador spoke highly of the late Senator John McCain, who had developed a strong relations with not only the Ambassador but that extended to the government of Tunisia and beyond.

Tunisia has has success in the United States with trade, being the #1 exporter of dates and the #3 exporter of olive oil. The Ambassador discussed many more opportunities - including the establishment of Global Chamber® Tunis... and that is the highest priority follow-up!!

Ambassador Gouia had a variety of meetings with business leaders like Joel Barthelemy of GlobalMed, government leaders on the floor of the Arizona House and Senata, and with education leaders including the Chancellor of Maricopa Community Colleges.

Ambassador Gouia is based in Washington, DC and we encourage our members to learn more about the business opportunities in Tunisia.

Regarding his background, President Barack Obama accepted his credentials to be Tunisia’s ambassador to the United States. This is the second-time Ambassador Fayçal Gouia has been posted to the Tunisian Embassy in Washington D.C.

He was born on July 10, 1959, attended the national school of administration in Tunis, Tunisia. he received a master’s degree in 1984 and went into government service, beginning in the ministry of women and family affairs as the head of the international relations department.

Ambassador Gouia’s assignments to the Tunisian embassy in Washington began in 1995 as cultural and press counselor, then went on to be its economic and commercial counselor in 1997 as its deputy chief of mission in 1999. He returned to Tunis in 2001 to head the Americas department in the ministry of foreign affairs. ambassador Gouia received his first ambassadorial assignment beginning in 2006 in Jakarta, Indonesia. he was accredited to Indonesia, the Philippines, Singapore, Thailand and, beginning in 2007, to Malaysia and Brunei.

He returned home in 2010 to become director general for Africa and the African union and in 2011 he was appointed director general for the Americas and Asia in the ministry of foreign affairs. in January 2014, he was named secretary of state for foreign affairs. he held that job until being named ambassador of Tunisia to Washington. Ambassador Gouia taught international relations at the diplomatic institute for training and studies of Tunis and at the high institute of human sciences, University of Tunis.

Ambassador Gouia is married and has two daughters. He speaks Arabic, English and French.