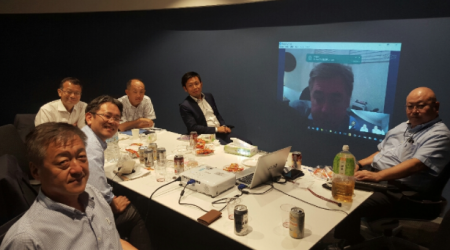 We're growing in Japan, and watch for exciting announcements this year from Tokyo and other metro areas around Japan.

With the past 24 times of the face-to-face meetings as a ground work, PM Abe and President Putin officially launched a negotiation of the Peace Treaty on January 22 in Moscow.

Its agreement requires a solution of the territorial issue of the four Northern Islands, which were occupied by the Soviet Union at the end of the World War II despite the existence of the Japan-Soviet Non-aggression Pact.

The two leaders conducted a joint press release, in which they agreed to accelerate the negotiations process.

They also agreed to enlarge the trade volume between the two countries by 1.5 times of the current size(around $20 billion).

The next negotiation will be taken up by their Foreign Ministers (Minister Kono and Minister Lavrov in mid-February in Munich during the National Security Conference.

The Japanese side is hoping that a basic agreement is reached when President Putin participates in the G20 Summit to be held in Osaka, Japan in June this year, but the Russian side expressed a prospect during the press conference that the negotiation would require some substantial time considering the requirement of mutually acceptable conditions.

At this year’s World Economic Forum Annual meeting in Davos, PM Abe made a speech on January 23 and proposed that the G20 nations create a negotiation framework to set an international rule for the distribution of data of individuals and companies.

Since Japan will host and chair the next G20 meeting in June in Osaka, he proposed to call the negotiation framework as “Osaka Track”

With regard to the new international rulemaking for data distribution, there is a basic consensus between Japan, the United States, and EU that like-minded nations among the WTO member nations should begin the rule setting work.

Considering that China is strengthening to regulate data outflow from China and demanding foreign companies resident in China to transfer technology, PM Abe invites China as well as India to participate in the negotiation.

Earlier in Tokyo on January 19, PM Abe made a speech at the TPP Committee meeting and emphasized the TPP rule of data distribution as a future model of an international rule.

Entering into force on December 30 last year, the 11 Trans-Pacific Partnership member nations got together in Tokyo on January 19, and agreed to expand the free trade zone by welcoming interested nations.

Japan chaired the first Committee meeting and led to an agreement of the procedure to discuss with nations and regions, which express a desire to participate in the partnership.

So far, Thailand and Indonesia, as well as the United Kingdom, are expressing interest in the TPP.

Yomiuri reported on January 19 that the Abe Administration started working on a new rule to encourage foreign students to found their own companies in Japan after their study in Japan.

Under this new rule, foreign graduates, who have the desire to establish their own companies in Japan are encouraged to contact and present an activity plan to the local government of individual towns where they wish to found their companies.

Once such a local government learns about the plan of a start-up, it makes a support plan and obtains METI’s qualification of subsidy and some other type of support for it.

According to the Japan Student Services Organization, the number of foreign students who are studying in Japan as of May last year was 298,980.

The number of Japanese people who visited abroad was 18,950,000, which is also highest ever.

A Japanese venture company by the name of ALE in Tokyo developed small metal-like balls with the diameter of 1cm for the purpose of causing an artificial shooting star.

400 of the balls were packed in a small sized satellite (60cm x 60cm x 80cm), and the satellite was successfully placed in a planned orbit by JAXA’s Epsilon rocket on January 18.

Once the balls make entries into the Earth atmosphere, the friction heat is supposed to make them shine like a shooting star and then to burn them out.

This is intended for commercial entertainment such as large scale outdoor events.