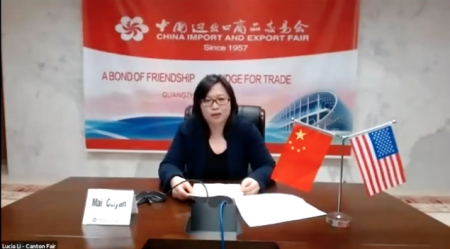 We welcome you to the 125th Spring Canton Fair, April 15th through May 5th in 3 phases. We previewed the Canton Fair on March 19th in Phoenix (Arizona) and via zoom with a group of experts who are deeply experienced with China and the Canton Fair.

We've given you nearly all you need to know to be successful at the Spring Canton Fair. Join us!

The Spring Canton Fair is divided into three phases, each with a different focus.

We encourage you to watch the 90 minute discussion with the experts HERE. They are remarkable in their experience... each 20 years or more, and each with a variety of tips to create success for your first, tenth or more trip to the Canton Fair. Enjoy!

If you have any questions, please reach us at info@globalchamber.org.

Starts 8am Pacific/Arizona Time, 9am Mountain Time, 10am Central and 11am Eastern)

10:00am Close of Networking and Local Program

Todd Cornell - Business Consultant at Cultur668. Todd is a Chinese Culture Authority, Business Consultant, and Interpreter. He has lived over 20 years in Chinese speaking countries and possesses above average China cross-cultural skills and fluency in Mandarin Chinese. He negotiated and managed multi-million-dollar technology transfer projects, joint ventures, and manufacturing businesses in Taiwan and Mainland China. Todd maintains profound insight into best practices for success with China that are found within the culture and philosophy of the Chinese themselves.

In our session on the 19th, Todd will discuss China Business Best Practices. Business in China can be challenging. Most people who have worked with Chinese companies tend to say that the biggest challenge, next to language, is culture. However, the Chinese work well amongst themselves. So, what is the difference? The Chinese have practices that they have depended on for thousands of years, one of which is the importance of learning about the people they are interacting with. Today you will gain insight into strategies and practices the Chinese apply in business and to achieve success in life.

Vlady Cornateanu - Founder/President at Sino American Business Development Company.
Vlady's professional life in the apparel industry started in the mid-'80s as a side job while working in real estate but developed very fast into a passion and a full-time profession. He has been developing his own brands as well as brands for other companies. The necessity to find the best factories brought him to China and the Canton Fair in the early '90s. The old Canton Fair venue on Lihua Lu was an extraordinary fair for a first time visitor like Vlady. He realized that this fair could accomplish all his sourcing needs in one trip no matter what the product category might be. He placed his first orders there and when received in the US, he knew that Canton Fair would be the only int'l sourcing trade fair for his business.
When the new venue opened at Pazhou, the Canton Fair became even better with a wider international audience and increase sourcing capabilities. He never skipped a fair ever since the first trip, arranging his entire sourcing and production needs around the Canton Fair's twice a year schedules. Guangzhou and the Canton Fair became his home away from home. His knowledge of trade fairs and the deep understanding of the Chinese culture, Chinese economy and its manufacturing base gave him the privilege to be asked to lecture business teams of different US companies on the intricacies of China manufacturing. He conducted many business-sourcing trips over the years to the Canton Fair for members of the Fashion Business Incorporated, California Fashion Association, MBA programs, and other Los Angeles trade organizations, promoting sourcing and facilitating relations between Chinese companies and US manufacturers ready to open their China markets.

"Welcome to China and the 125th Canton Fair," said Lucia Li, International VIP Service Executive at China Import and Export Fair. "For a third time we appreciate the opportunity to work with Global Chamber® on this special, insiders view of the Fair." The Canton Fair and Global Chamber® teamed up last year multiple times to share special information to companies looking to succeed at the Canton Fair and in China. Our members successfully attended, including speaker Todd Cornell.

0 comments on "VIP Preview of the Spring Canton Fair"