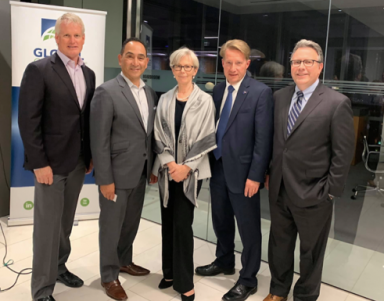 Global Chamber® Denver was pleased to host Finland's Ambassador to the U.S. Kirsti Kauppi for a special reception.

Thank you to Richard Levin at Polsinelli, the Embassy of Finland, Finland Consul Juha Makikalli and Felicia Martinez, Colorado European Union Center of Excellence... for making this happen.

We enjoy collaborating with all of you.

Her Excellency Kirsti Kauppi became Ambassador of Finland to the United States in September 2015.

Before that (2012-15) she was Political Director (Director General for Political Affairs) at the Ministry for Foreign Affairs in Helsinki. In 2009-12, Ambassador Kauppi served as Director General for Africa and the Middle East. Ambassador Kauppi has served in the Finnish Embassies in Berlin (2003-2005) as Deputy Chief of Mission (Minister), in Washington (1997-2000) and Bangkok (1989-92). Ambassador Kauppi's solid knowledge on European Union affairs builds on her four-year service (1993-97), in the Finnish Permanent Mission to the EU in Brussels.