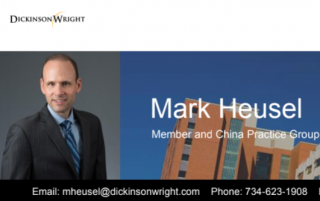 The China practice at Dickinson Wright supports companies doing business in China and the U.S. We also intend that the information we share is helpful for any company to better understand the most recent developments between China and the U.S. on trade.

Last week, the U.S. government took a series of further actions towards Chinese technology companies, with a potential impact of eliminating the presence of such companies in the United States.

On Wednesday, the U.S. Secretary of State issued a Press Statement announcing the launch of an effort allegedly intended to protect America's critical telecommunications and technology infrastructure (the so-called "Clean Network" program). Dubbed the five lines of effort, a five-part plan of the "Clean Network," the “Clean Network” initiative is focused on establishing "Clear Carriers," "Clean Stores," "Clean Apps," a "Clean Cloud," and a "Clean Cable" with the stated goal of combating the alleged aggressive and intrusive practices by the Chinese Communist Party ("CCP") and Chinese telecommunication companies and protecting privacy and sensitive information of U.S. companies and individuals.

In response to this announcement, Foreign Ministry spokesman Wang Wenbin responded, "It is absurd and ridiculous the United States keeps talking about 'clean networks' while it has stained itself with bad practices in cybersecurity, with well-known examples such as the Snowden case.”

The larger overtones to such a move by Washington suggests that the Administration is pushing forward its “decoupling” agenda in the technology area. Following the U.S. Secretary of State's statement, on Thursday evening the U.S. signed two Executive Orders (“EOs”) that placed restrictions on TikTok and WeChat, two of the most popular Chinese social media apps available used in the U.S., potentially affecting over a billion people worldwide. In June and July, India banned over 100 Chinese apps from use in India based on “national security” concerns, a move applauded by 25 members of the U.S. Congress, who also urged the U.S. President to follow suit, stating the “U.S. shouldn’t trust TikTok or other Chinese-affiliated social media websites/apps to protect Americans’ data, privacy or security. We urge you to take strong action to stop CCP’s sophisticated espionage campaign against our country and protect our national security.”

The EOs, while broad and ambiguous at the same time, attempt to prohibit "any transaction by any person, or with respect to any property, subject to the jurisdiction of the United States" with ByteDance (the creator of TikTok) and Tecent (the creator of WeChat). The EOs further provide that they will take effect in 45 days (September 20, 2020). Many have worried that the EOs read in their broadest interpretation could lead to an outright ban of the TikTok and WeChat apps from Apple and Google app stores or even that use of these very popular apps could be prohibited altogether in the U.S. A total ban of the apps sent a chill down the backs of millennials who turn to TikTok every day, as well as the Chinese-U.S. business community who depends principally on WeChat as the most reliable, efficient and cheapest means of communication for those conducting business in North America and Asia. The EOs, however, are not specific, as the term "transaction" remains undefined in the EOs and will be further defined by the Secretary of Commerce in rules and regulations to be implemented within 45 days of the Orders. Thus, the immediate rush to judge the scope of the Orders is premature but, clearly, the future functionality of these apps will be impacted in the U.S.

In signing both EOs, the U.S. President alleged that TikTok and WeChat could collect sensitive data from their users, which would allow the CCP to have access to Americans' personal and proprietary information, monitor Chinese citizens abroad, and carry out disinformation propaganda to benefit CCP's interests. Similar to the justification for the Section 301 tariffs, the U.S. President once again utilized “national security” concerns in support of the restrictions on TikTok and WeChat – a blunt nationalist tool the Administration seemingly wields against friend and foe alike whenever it wants to push forward its trade agenda.

Voices in the tech sector quickly responded. TikTok announced that it was considering legal remedies in the United States, pointing out that user data is stored in the U.S. and not available to the CCP.  Similarly, WeChat stores its user data in Canada. China Daily, the English-language newspaper controlled by the CCP, described the two executive orders as "vaguely worded" and it challenged the legal authority of the two executive orders to use the two U.S. emergency laws to ban the transactions with TikTok and WeChat. Even Facebook’s Mark Zuckerberg, a competitor to both platforms, told employees that banning TikTok would set “a really bad long-term precedent.” Referring more to the threat of nationalist agendas that might threaten Facebook (which is already blocked in China) in other countries. Zuckerberg went on to reflect that if any country could obtain access to user data, that outcome would be problematic.

On the world stage, the Orders, as well as the Clean Network program have met with mixed reactions, with many fearing that the Administration’s efforts are nothing short of a governmental taking of foreign assets and a thinly veiled attempt to promote the U.S. tech sector and create a monopoly. Attacks on Chinese tech companies are not new with the Administration (think Huawei, ZTE, and Grindr), but never before has the Administration moved so quickly against companies when there was only a “threat” that user data could be shared.  The Administration’s legitimacy has also been questioned by statements from the U.S. President, who claimed that in exchange for approving Microsoft’s acquisition of TikTok (a possible outcome of the EO), the U.S. Treasury should receive “a very big proportion” of the sales price.

This type of statement is exactly the conduct described in the U.S. Trade Representative’s Findings, which served as the basis for justifying the Administration’s 301 trade tariffs over the last two years.  And while China’s hands remain unclean, having banned Google, Facebook, Whatsapp, and other U.S. tech platforms, it appears that China and the U.S. are now engaged in a tit for tat tech war that many have feared will lead to an expanded economic cold war between the east and the west. What remains clear, however, is that the U.S. Administration is moving forward with an anti-China campaign designed to protect the U.S.’s “national security interests” at the expense of normal trade regimes.

China, however, is not alone in feeling the effects of this aggressive inward trade policy, as the Administration has also recently threatened Europe over the digital tax and Canada over aluminum imports. These outcomes not only create uncertainty in international trade but have the potential of exacerbating prospects for a quick recovery of the global economy as it fights its way out of the recent pandemic.

About Hezi: Hezi Wang serves as Legal Coordinator for the China Practice Group. Given the firm's international scope of practice, she also frequently engages with other Asian-Pacific clients. She works on matters across a broad spectrum of legal areas involving the United States, China, and the Asian-Pacific region. Hezi is fluent in both Mandarin Chinese and English. Given her unique qualifications, she is able to efficiently communicate with the firm's Chinese clients and other attorneys with respect to legal matters that affecting Chinese clients involving corporate matters and business operations in the United States. She also assists with immigrant employment based matters, including L-1 and H-1B visas. Hezi has a unique background of cross-culture experience. Hezi is admitted to New York Bar.