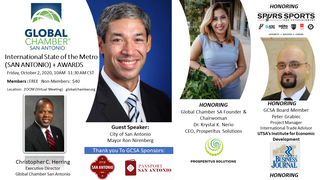 Global Chamber® San Antonio organized the first annual International State of the Metro and Award special event for San Antonio, Texas USA. The event featured City of San Antonio Mayor Ron Nirenberg. You'll be impressed about Mayor Nirenberg's unique international sensibilities undoubtedly impacted by his leadership role with Sister Cities International. You'll see how connections lead to business through a Mayor who understands how to build relationships and leverage those for business success.

Watch and listen to the event HERE on facebook.

Watch and listen to the event HERE on YouTube.

Global Chamber® San Antonio Executive Director Christopher Herring kicked off the program and introduced advisory board members and other throughout the 80 minute program.

In addition thank you Peter for presenting the International Business Report Card on the Metro - San Antonio. The Board of Advisors gave the metro a well earned overall grade of "B".

Thank you to City of San Antonio and Passport San Antonio for your international business accomplishments and your sponsorship of Global Chamber® San Antonio.

Another integral part of the international framework in Central Texas is San Antonio Council for International Visitors (SACIV), a non-profit organization that arranges professional programming for emerging international leaders who have been selected by the U.S. State Department’s International Visitor Leadership Program (IVLP) to come to the United States. Thank you SACIV for the collaboration!

Thank you San Antonio Spurs Sports for all you do as well!

We also recognized the San Antonio Business Journal for their contributions to the region's success, too.

One of the tangible successes for the region is the attraction of Japanese investment. Mayor Nirenberg cited 30 Japanese firms that have invested in metro San Antonio.

Ron Nirenberg is the mayor of San Antonio, one of the nation’s fastest growing cities with the 7th largest population in the U.S.

Mayor Nirenberg was raised in Austin, Texas, and attended college in San Antonio. He is the son of an immigrant from Southeast Asia and the grandson of immigrants from Eastern Europe who passed through Ellis Island. Through his personal experiences, Mayor Nirenberg developed a core commitment to civic participation and the universal values of liberty, justice, and equal opportunity for every person.

Mayor Nirenberg was re-elected to a second term on June 8, 2019.

He was first elected to represent District 8 on the San Antonio City Council in 2013. During his two terms, he championed smart city and regional planning, inclusive economic development, environmental stewardship, fiscal responsibility and governmental accountability. As councilman, Nirenberg brought together a public-private coalition to save the world-renowned Bracken Bat Cave, the largest colony of bats in the world.

Under his leadership as mayor, the city’s budget has been adopted with a focus on equity to ensure that all parts of the city have the same level of services and infrastructure. He is focused on making key investments necessary to accommodate the growth of San Antonio, which is expected to nearly double in population by 2040. This forward-looking approach drives the mayor’s vision of a compassionate community with a globally competitive economy. In 2018, the United States Conference of Mayors recognized Mayor Nirenberg with the Small Business Advocate award for his efforts to encourage entrepreneurism.

In an effort to combat the effects of global climate change, Mayor Nirenberg spearheaded a Climate Action and Adaptation Plan, which was adopted by the City Council in October 2019. Shortly thereafter, Mayor Nirenberg joined the Climate Mayors Steering Committee, a group of 24 mayors who will serve as a leading voice in efforts to further climate action in the more than 400 cities across the U.S. making up the Climate Mayors coalition.

Mayor Nirenberg is the Chairman of Sister Cities International, a nonpartisan organization that connects cities across the globe through civic, educational and cultural exchanges. The City of San Antonio enjoys active and productive Sister City relationships with 11 cities worldwide and Mayor Nirenberg has been an active participant in establishing productive, people-to-people relationships through global community partnerships and volunteer action.

Prior to his public service, Nirenberg was the founder of two small-businesses, worked as the general manager of KRTU-FM San Antonio, and as a program director for the Annenberg Public Policy Center where he developed and directed award-winning civic engagement programs.

He and his wife, First Lady Erika Prosper, are the proud parents of their son, Jonah. 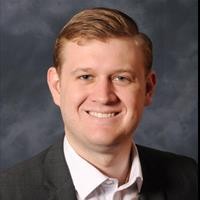 Our Advisory Board Member, Quinton Tramontano, strives to understand you and your financial goals. He takes the time to ask the thoughtful, meaningful questions and to listen carefully. To understand exactly where your wealth stands today and where you would like it to be tomorrow. He then design, implement, and periodically review a customized wealth management strategy. His strategies aim to enable you and your family to pursue your personal financial goals without undue sacrifice to your lifestyle, or take on unnecessary investment risk. His wealth management approach is about using wealth to turn goals into reality.

Quinton trained in New York City and subsequently moved to Texas. His wife, Dusti, and Quinton live in the north side of San Antonio. He received his Economics degree from Baylor University in the spring of 2015. He helps his clients as they build, manage, and distribute their wealth. Quinton is very passionate about fly fishing, electronic innovations, and traveling with his family.

Global Chamber® is a growing and collaborating community of CEOs, executives and leaders in 525 metro regions around the world... connecting member businesses to new opportunities and advancing growth and success. It's the only chamber of commerce in the world operating in hundreds of locations that helps exporting, importing and investing members to connect through warm introductions to clients, partners, projects and resources.

Global Chamber® San Antonio is one of 525 metro chapters around the world... helping regional companies be global and UNSTOPPABLE!