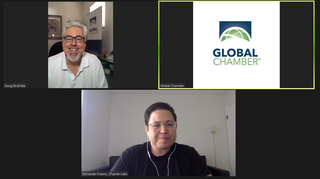 We were pleased to feature Fernando Franco of PuentaLabs and Tercos Media, who provided his perspective on differences between the business ecosystems in Silicon Valley with the rest of the world, and how you can benefit.

Silicon Valley was thrust unexpectedly at Fernando while he was leading economic development activities for ProMexico in California. As he was moving in a new location in Southern California, he was asked to move to San Francisco to focus on the tech and manufacturing companies. It took some time to get into the network but Fernando assimilated, and we benefit because his stories and tips are invaluable!

In this 60 minute conversation with founder/CEO Doug Bruhnke, Fernando addressed...

Fernando also discussed the importance of diasporas in the Silicon Valley. He is perhaps the most expert on the Latin America diaspora including Mexico and now extending far beyond through is work at LatinSF and his current firms. He touched on Silicon Vikings and other groups and shared why that's an important part for most foreign companies landing in the area.

Thank you Fernando for sharing your knowledge and expertise. That was informative and fun!

Fernando Franco is Executive Director of PuenteLabs in San Francisco. He is also Co-founder of Tercos Media, which since 2016 has produced the first podcast in Spanish from Silicon Valley, "El Valle de los Tercos", with more than 250,000 thousand downloads, mainly in the United States, Latin America and Spain.

Fernando came to Silicon Valley in 2011 as a Director of ProMéxico, the former investment and trade agency of the Mexican government, focusing on representing all of Mexico's economic interests in Silicon Valley. He began his career as Director of Investment Promotion in the Government of Baja California, attracting modern industry and generating jobs with high added value for the region. Some of the companies that established operations in Baja California during this period were: Honeywell Aerospace, Nissan, Goodrich Aerospace, Sharp, among others. He has a degree in International Relations.