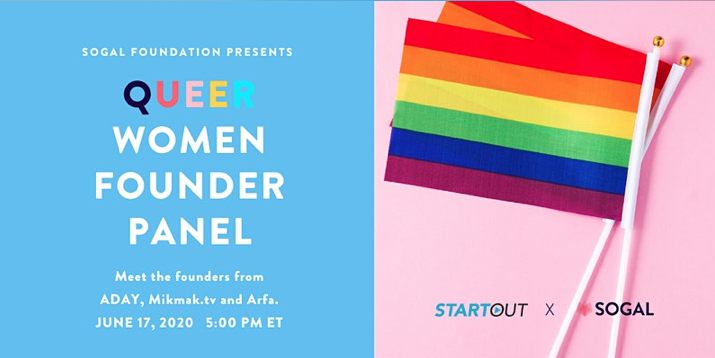 Celebrate Pride month with SoGal Foundation and StartOut and amazing queer women founders. Meet the entrepreneurs and learn how they fundraised, scaled their businesses, sustain during a crisis, and prioritize wellness.

In partnership with StartOut. StartOut’s mission is to increase the number, diversity, and impact of LGBTQ+ entrepreneurs and amplify their stories to drive the economic empowerment of the community.

Meg He is the co-founder of ADAY, a direct-to-consumer brand creating the clothing of the future, named one of the World’s Most Innovative Companies by Fast Company. She and her co-founder, Nina Faulhaber, are obsessed with simplifying their wardrobes (and their lives), using technology, design and versatility to set a new, consciously designed standard for apparel. Prior to ADAY, she worked at Poshmark, Cowboy Ventures and Goldman Sachs. Meg has a BA from Oxford University, an MBA from the Stanford Graduate School of Business and was named to the Forbes’ 30 under 30 with Nina. She lives in Brooklyn, New York and finds flow in brazilian jiu jitsu, sound meditations and hiking with her rescue pup Helix.

Ariel Wengroff is the Co-Founder, Chief Content and Community Officer at arfa, Inc. Previously, Ariel worked at VICE Media where she was an Executive Producer of the Emmy nominated VICELAND show WOMAN with Gloria Steinem, which she turned into a course at USC Annenberg. Ariel also served as Publisher of Broadly, VICE's women and LGBTQ+ identity channel, where she established Broadly as an internationally recognized brand. As Chief of Staff at VICE, Ariel worked on interviews with President Obama, President George W. Bush, Vice President Biden, Malala, and more. She is on the 2019 Forbes 30 Under 30 Media list, recipient of the 2019 University of Vermont (UVM) Alumni Young Alumni Award, Kindred Media & Liontree Executive-in-Residence, and currently serves on the board of the Gay Men's Health Crisis (GMHC), Sad Girls Club, Lesbians Who Tech, VICE’s Diversity and Inclusion Advisory Board, and is a former commissioner on the Vermont Commission on Women and former member on the Vermont Board of Libraries. Her most recent film Sitara: Let Girls Dream, premiered on Netflix on International Women’s Day 2020.